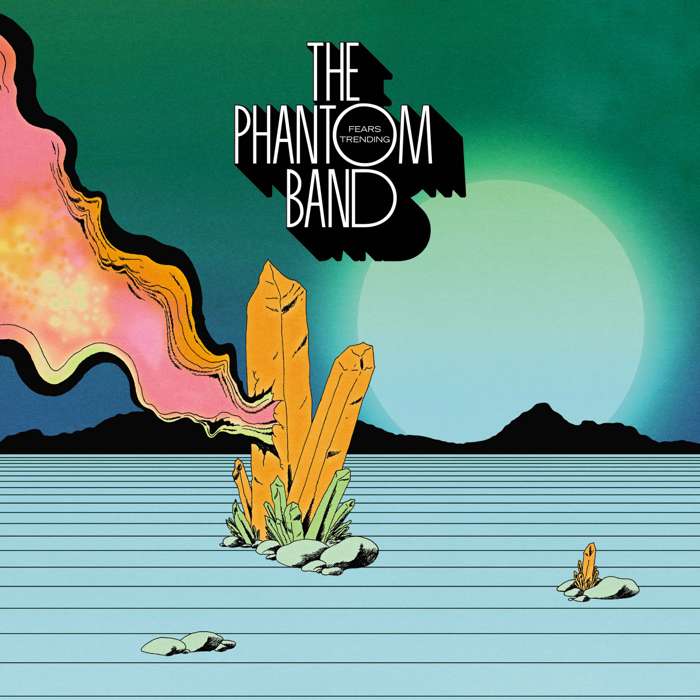 If you’ve followed The Phantom Band throughout their career you’ll be starting to appreciate that feast will often follow famine: just as two wildly singular, diverse albums in Checkmate Savage and The Wants sprung up between 2009 and 2010, preceding a period of prolonged quiet (solo projects notwithstanding), so the group’s critically acclaimed third album - last year's Strange Friend - is hotly pursued by its exotic, anagrammatical sibling, Fears Trending.

Lauded across the board last spring, Strange Friend’s instant hit to the senses was the sound of a band pulling a thread tight through their naturally wandering creative tendencies and affecting a sense of positivity, even amidst quiet doubts over living in a world simultaneously hyper-connected and disconnected through the internet. For those who saw through the likes of ‘Clapshot’s’ irrepressible anti-anthem swell, though, Fears Trending is a resounding confirmation that the band’s recent recording sessions also bore out something of a darker hue.

"Maybe it's the evil twin of Strange Friend," comments guitarist Duncan Marquiss. "They're stranger friends, oddball vestiges and hybrids." Chief vocalist Rick Anthony agrees, pointing out that although Fears Trending merely came about as an anagram of their third record’s title, its connotations ring true, with a greater focus on themes of online isolation that they'd pawed at previously. "The reference is obviously there," Marquiss explains. "Maybe it reflects our wariness of communications technology just now - which paradoxically seem to alienate people from themselves. We're all swamped with information so I question whether the band would necessarily want to add to the clickstream."

It’d be too broad to call Fears Trending the dark side to Strange Friend's light. The playful intricacies and deviations of The Phantom Band remain and, after all, the album was recorded at the same time as its sister. "I think it's more about the atmosphere than the writing process that splits the two albums," Anthony reflects. "I guess there was a desire with Strange Friend to come back with no baggage attached and release a record that seemed really straight to the point. This record is straight to the point too but it's just that it's making a different point."

So it goes with The Phantom Band, a group in permanent evolution: may their creative restlessness never find succor.